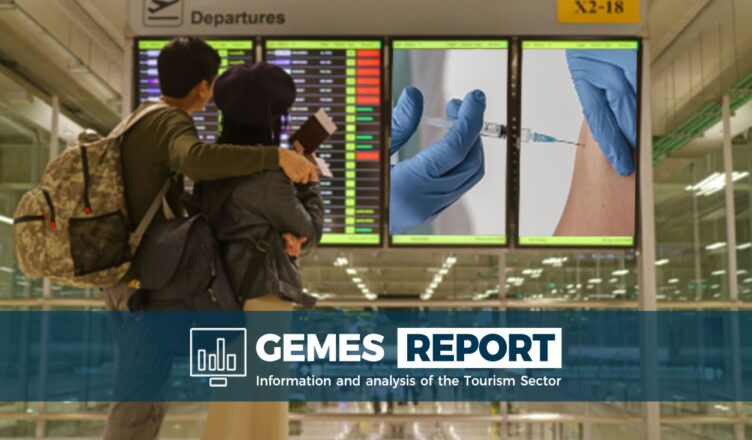 Vaccination is becoming a crucial factor for the recovery of the tourism sector, as it promotes mobility as well as increasing traveller confidence, and based on the results of various international surveys, travel intentions have increased as vaccination progresses. Expedia Group reported in its 2021 travel trends paper that as vaccines become available, the likelihood of travel will increase. In addition, trips of a week or more will be taken and the younger segment of the population will travel and spend the most.

TripAdvisor identified source search preferences in the US, UK, Australia, Italy, Japan and Singapore, which show that travellers plan to travel in the second half of the year, but will make plans and purchases beforehand. These results also reinforce the argument that vaccinations increase people’s confidence to travel, with 26% of respondents even making it clear that they would only travel to destinations that require visitors to be vaccinated prior to arrival.

The European Union has stated that it will allow the entry of fully vaccinated residents of the United States, which will be an important step in opening up the main tourist destinations of the old continent to tourism. In the case of the UK, it has been reported that international travel could resume from 17 May, following a traffic light system, which will classify countries according to risk and travel restrictions required. Other destinations, both in Europe and elsewhere in the world, are making progress in vaccinating tourism staff. Turkey, Dominican Republic, United Arab Emirates, Thailand, Croatia, Greece and Belize are some examples of countries that are prioritising vaccination of tourism staff in order to promote themselves as safe and reliable destinations.

Progress in inoculation is becoming an important trigger for tourism growth, as the population’s intention to travel increases dramatically when vaccinated. Tourists from countries that achieve vaccination levels above 70% will be the first to leave again and will most likely visit destinations in the same conditions. It is therefore important to monitor progress in Mexico’s main source markets for tourists, but also in countries that compete directly with Mexico.

In mid-December, the application of COVID-19 vaccines began in the world, and more than four months after this event, some of the main markets that send tourists to Mexico are on their way to achieving high application rates. Such is the case of the United States, with 70.16 doses applied per 100 inhabitants, followed by the United Kingdom, with 70.91 doses per 100 people.

Some of the European countries have made significant progress in vaccinating their populations; in Spain, Germany, France and especially the UK, for example, figures are above 30 doses per 100 inhabitants. This is good news for Mexico’s tourism, considering that visitor arrivals by air from the European continent fell -75.6% in January and -81.9% in February this year, compared to the same months last year. In contrast, it is worrying to note that Latin American countries (also relevant markets for Mexico), are the ones that register the least progress in vaccinations applied per 100 inhabitants, such as Peru (4.6), Argentina (16.72), Brazil (19.29) and Colombia (9.27).

With regard to destinations that can be considered competitors of Beach for Mexico, the greatest progress in vaccination per 100 inhabitants is observed in Bermuda (89.77), followed by the Maldives (71.57) and the Dominican Republic (17.03), rates higher than the 12.94 doses applied in Mexico per 100 inhabitants. It should be recalled that some Caribbean destinations, such as Bahamas, Jamaica, and Dominican Republic, did determine total or partial border closures last year, as detailed in a previous GEMES Report article (Mexico performed better compared to Caribbean destinations in 2020).

During the COVID-19 pandemic, the segment with the most potential for tourism rebound has been Nature, with outdoor activities and ease of social distancing. Mexico outperforms most of its competitors in immunization against COVID-19, however, Costa Rica (16.08), the main competitor, as well as Iceland (35.61), are ahead of Mexico (12.94) in the number of doses applied per 100 inhabitants.

With regard to the countries that can be considered Mexico’s competitors in the Culture segment, the greatest progress can be observed in Turkey (26.24 doses applied per 100 inhabitants) and Brazil (19.29), despite the high rates of positive cases and deaths due to COVID-19 in the latter. In the group of competitors in the graph below, in addition to Brazil, there is India, which has also shown significant numbers of positive cases and deaths recorded during the pandemic.

Finally, a comparison of the application of vaccines in Mexico and in competing «cities, entertainment and culture» destinations reveals a different phenomenon, since in this product Mexico is the country with the lowest number of doses applied per 100 inhabitants in the group. It is worth mentioning that the number of doses applied in the United Arab Emirates (105.82), the United States (70.16) and the United Kingdom (70.91) confirm greater progress in the immunization of their populations.

Particularly important markets for Mexico, such as the United States, are advancing rapidly in the implementation of vaccines, which is considered an opportunity for tourism not only for Mexico, but also for Caribbean destinations, as mentioned in previous GEMES Report articles.

Competition to gain market share in the US market will be intense as it seeks to attract the interest and maintain the confidence of travellers, but it is also important not to lose sight of the fact that travel will play a key role in bringing people together after a year of social distancing.

However, vaccination will not be the only factor motivating people to travel; maintaining compliance and updating protocols with international standards, certifications, hygiene measures, open spaces and travel bubbles, continue to be initiatives perceived as safe and even indispensable, to strengthen the recovery of the tourism industry.