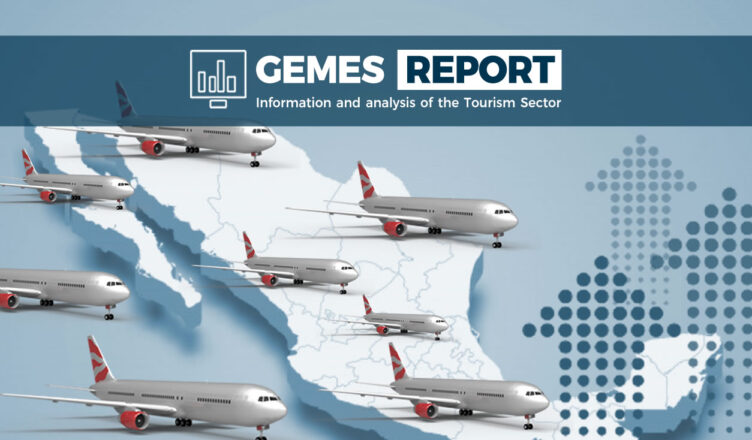 Air passenger transport is recovering from the worst crisis in the industry’s history. Air connectivity is fractured, but routes are beginning to reopen as travel restrictions are lifted and travel needs increase. The reduced connectivity has had strong impacts on tourist destinations, although for Mexico the consequences have been, to some extent, less negative, due to the fact that it never closed its borders and its proximity to the United States.

Nevertheless, the impact is still notorious. The most recent figures from the Federal Civil Aviation Agency (AFAC) reveal, for the January-May period of this year, a -48.6% contraction in passenger arrivals on international flights to Mexican airports, compared to the first five months of 2019 (the year prior to the pandemic); that is, 5 million fewer passengers. Likewise, traffic on domestic flights reached 15.4 million passengers transported in the period, 5.7 million less than in the January-May 2019 period. The relevant comparison is made with respect to 2019, since, in the months of April and May of last year, air connectivity and passenger transportation suffered a drastic decrease.

Passenger arrivals on international flights showed signs of deceleration in the first two months of the year; however, as of March there is greater dynamism and, in the month of May, with 1.6 million passenger arrivals, the gap with respect to May 2019 is -17.4%, the smallest drop in the entire contingency period.

This upturn in international passenger transportation is mainly due to a greater demand for travel from the United States. As can be seen in the following graphs, nine of the ten cities with the highest volume of passengers flying to Mexico are U.S. cities, led by Houston and Dallas, with 618.8 thousand and 606.9 thousand passengers, respectively, in the January-May period. These cities are close to reaching the passenger levels prior to the health crisis, as they register decreases of -17.8% the former and -4.8% the latter in the period, comparing with 2019 figures.

It stands out that the recovery has not been uniform and there are strong differences between origin cities. It is interesting to note that there are cities such as Denver, Phoenix, San Antonio, Charlotte, among others, that already register positive rates; while others of great importance for air connectivity such as Los Angeles, Atlanta or New York, still present strong decreases of over 40% in the number of passengers to Mexico.

On the other hand, the volume of international passengers is concentrated in a small group of Mexican airports. Cancun airport is by far the main destination for the international market; with 2 million passengers received in the January-May period, capturing 37.1% of the total volume; while Mexico City airport, which is very important both as a final destination as well as a connecting point under normal circumstances, received 1.4 million arrivals in the period (25.7% of the total), registering a drop of -60.6% with respect to 2019.

Despite the recent rebound in the month of May, Mexico City is still -40.8% below the volume of passengers received in the same month of 2019; while airports such as Los Cabos or Monterrey recorded increases of 9.2% and 19.1%, respectively.

As for the main international routes, Cancun stands out as an important Mexican destination, above Mexico City airport. The Dallas-Cancun route recorded the highest passenger traffic in the January-May period, totaling 183.1 thousand passenger arrivals, with an increase of 11.9% over the same period in 2019. The Houston-Cancun (0.04% increase), and Denver-Cancun (21.3%) routes, among others, also surpassed the level of arrivals prior to the pandemic.

For the month of May, the Houston-Mexico City route recorded the highest passenger arrivals, which may have been due in part to the increase in the number of Mexicans traveling to Houston to obtain the COVID-19 vaccine. This route recorded an increase of 67%, compared to the same month in 2019, growth much higher than that recorded on other routes.

In contrast to the situation of routes to U.S. cities, connectivity with Canada has been halted since late January by government order, which was very unfortunate, considering that it occurred in the season of greatest demand for travel from that country. The Toronto-Cancun route, for example, was the route with the highest traffic between abroad and Mexico in the January-May 2019 period, transporting 235.8 thousand passengers from the Canadian city to the Mexican destination. Other important routes, connecting Montreal, Toronto and Vancouver with Cancun and Mexico City, remain suspended. The good news is that, with the lifting of the restrictions, Canadian airlines have announced the gradual resumption of their routes to Mexico (and other destinations) in the summer.

Connectivity with Europe also does not show an evolution that indicates a recovery in recent months, except for the Madrid-Mexico City route (one of the 15 most relevant routes for Mexico in 2019), from which 54.8 thousand passengers arrived up to May, -64.2% less than in the same period prior to the pandemic. Routes from UK cities have been suspended since March of last year, except for those connecting London with Cancun and Mexico City, which show little activity.

In the case of connectivity with South America, the routes from Sao Paulo and Quito to Mexico City stand out, which up to May show decreases of -38% and -39.6% respectively in passenger arrivals to Mexico compared to the first five months of 2019, with a clear recovery especially in the last month, which coincides with the rebound in the arrival of visitors from Brazil and Ecuador to the country.

Passenger movement on domestic flights has shown a more continuous and stable recovery than international since the end of last year. In the month of May, 3.8 million passengers carried were recorded, representing a decrease of -19.1% compared to May 2019, slightly less than the drop recorded in the previous month.

In the national context, Mexico City takes on greater relevance, although its recovery has been slower compared to other airports in the country. In the first five months of the year, it accumulated 4.4 million passenger arrivals on domestic flights, which represents a reduction of -34.1% compared to the same period of 2019; that is, 2.2 million fewer passengers.

In contrast, Tijuana is positioned as the second airport with the most arrivals, totaling 1.8 million and a drop of just -0.2%; it is worth noting that in April and May it exceeded the number of arrivals by 8.4% and 11.6% respectively compared to the same months of 2019. Likewise, Los Cabos airport is 0.6% below the level of arrivals in the period and has registered increases since March.

With 1.7 million passengers transported in the January-May period (10.8% of total volume), the Mexico City-Cancun route is the most important in the country, closing the gap with respect to 2019 to -18.7%; in May alone this route transported 396.9 thousand passengers (-11.4%). In general, routes connecting beach destinations show greater progress in passenger volume recovery, such as Mexico City-Los Cabos (-5.9%), and Mexico City-Puerto Vallarta (-18.5%); even the Monterrey-Cancun (3.6%), Guadalajara-Cancun (22.8%) routes already overcame the «pandemic effect», showing increases with respect to 2019.