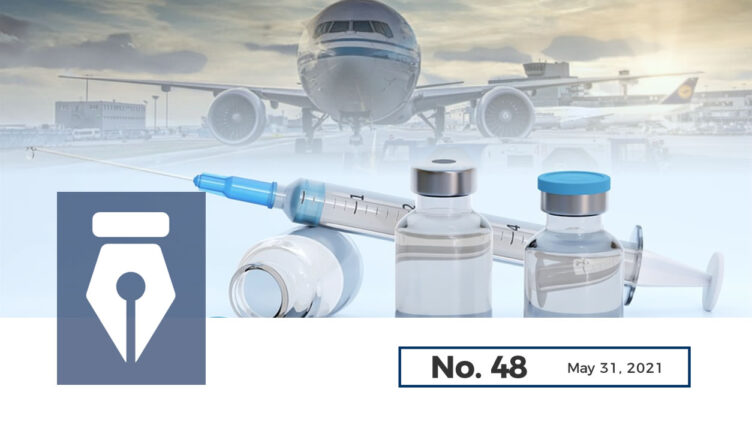 Perceptions of insecurity in the first quarter of this year decreased by -7 points compared to March 2020; this result is the lowest in the survey’s 30 quarterly surveys since September 2013.

During the first quarter of the year, the evolution of the economy did not show positive results either; the performance of the economy, compared to the previous quarter, showed a strong deceleration, close to stagnation, and shows that it may take until 2023 to reach pre-pandemic levels of activity.

The update of the United States Travel Advisory placed a large number of countries, including Mexico, at level 4, corresponding to a Do Not Travel recommendation. In the particular case of each state, the same levels of recommendation remain in place.

Undoubtedly, it is increasingly important to accelerate the vaccination process, since the degree of progress of vaccination is one of the main factors that influence the confidence of tourists in selecting a destination to travel to.

International visitor arrivals by air fell by -53.7% in the first quarter.

International visitor arrivals to Mexico decreased -4% compared to March 2020 and with respect to March 2019, the drop is -54.6%. A favourable result is that in March this year there was a rebound of 66.9%, compared to February, the previous month, which was mainly driven by US tourism and, to a lesser extent, by the incipient reactivation of South American and European markets. It should also be noted that this is calculated on a very low base of comparison.

The perception of insecurity decreased in the first quarter, but remains high in some beach destinations.

According to INEGI’s National Urban Security Survey, 66.4% of the adult population in 70 cities in Mexico feel insecure, which represents a decrease of -1.7 percentage points compared to the December measurement and -7 points compared to March 2020. This result is the lowest in the survey’s 30 quarterly surveys since September 2013, largely attributable to the confinement caused by the pandemic, considering the levels of the last three quarters. The survey identifies ten beach destinations that together average 58.4% of social perception of insecurity in March, registering a decrease of -1.6 points from the previous quarter and -7.9 percentage points from the March 2020 measurement.

The timely estimate of GDP shows that the economic recovery lost momentum in the first quarter of the year by growing 0.4%, compared to the previous quarter. In annual comparison, GDP is still -2.9% below the level recorded in the first quarter of 2020. The recovery has been not only slow, but also very uneven. Information from the Global Economic Activity Indicator shows that in the first two months of the year, accommodation and food preparation services recorded a fall of more than -42%, which shows that the tourism sector is still far from recovering.

Vaccination is becoming a crucial factor in the recovery of the tourism sector, as it promotes mobility while increasing travelers’ confidence. Based on the results of various international surveys, travel intentions have increased as vaccination has progressed, as people’s confidence to travel has increased, and many tourists have even made it clear that they would only travel to destinations that require visitors to be vaccinated prior to arrival and that have made substantial progress in implementing vaccinations.

On 20 April, it was released an update of the travel recommendations for 208 of the 209 destinations listed in the Travel Advisory. As part of this update, 109 nations were downgrated to level 4 «Do Not Travel», thus accumulating 80% of the list with the highest level of alert. This update responds to the risks travellers continue to face from COVID-19. Canada, United Kingdom, Germany, France, Italy, Jamaica and Mexico are among the nations downgraded to level 4.