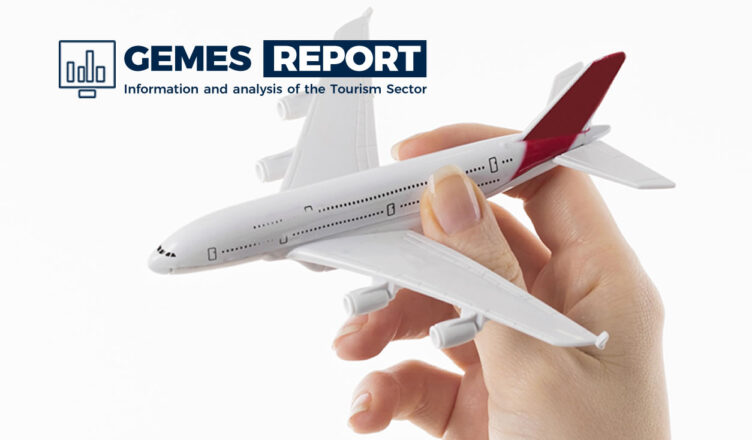 With figures up to the month of October published by the Federal Civil Aviation Agency, a slow progress is observed in the recovery of passenger movement at airports in Mexico, which is going through the worst crisis in history due to the coronavirus pandemic. In the first ten months of the year, the arrival of 7.9 million passengers on international flights was registered, which represents a decrease of -60.4% compared to the same period of 2019; while domestic traffic shows a smaller reduction in the same period, of -49.9%, adding 22.2 million passengers.

After having fallen by more than -90% in the second quarter of the year, the arrival of international passengers began the recovery phase in July, with the gradual lifting of travel restrictions and the reactivation of air connectivity, which so far it is not complete. In the month of October, the best performance of the last seven months is observed, with the arrival of 713.2 thousand international passengers, which represents an increase of 47.4% compared to the 484 thousand passengers reported in September. Compared to October 2019, there is a drop of -60.4%.

So far in the year 9 of the 10 cities from which more passengers originate to Mexico are in the United States, whose proximity and connectivity (although decreased) has been a fundamental factor in the recovery. Dallas became the city from which more passengers arrive since July, and so far this year it has accumulated 727 thousand, with an annual decrease of -48.5% and only -26.2% in October. It should be noted that in the last month the resumption of operations was observed from some cities in countries other than the United States, such as Bogotá, Buenos Aires, Medellín and Calgary, among others; as well as greater dynamism from Canadian and American cities.

Analyzing the AFAC data at the origin-destination level, it is observed that the route that generates the most passengers from abroad to Mexico is Los Angeles-Guadalajara, which in the January-October period transported 208 thousand arriving passengers, with a decrease of -49.1% compared to the same period last year. However, in October more passengers arrived in Mexico on the Houston-Cancun route (28.9 thousand passengers and a drop of -21.9%); and on the Dallas-Cancun route (28.6 thousand passengers), which reports a minimal drop, compared to the rest, of -5.9% compared to October 2019.

Until October a total reestablishment of the country’s international connectivity is not registered and it could hardly be achieved in the near future; Fortunately, there are several routes that are recovering the rhythm, mainly to beach destinations, such as Cancún (from Dallas, Houston, Atlanta, New York, Los Angeles, Calgary), or Los Cabos (from Los Angeles, Dallas, Houston and Phoenix). Likewise, the routes from Bogotá and Panama City to Mexico City and Cancún were reactivated, and the London – Mexico City route from Europe, among others.

In the national context, the path towards the recovery of the passenger movement takes a greater advance than the international one. In October 2.7 million passengers were reported on domestic flights, with a decrease of -41.4% compared to the same month of the previous year, and an increase of 16.9% over the traffic registered in September.

On domestic flights, 3 out of 10 passengers arrived in Mexico City in the January – October period (6.5 million), with a drop of -52.5% and -48.6% only in October. It is followed by the city of Tijuana, which is recovering more dynamically than the rest of the destinations (displacing Guadalajara, Monterrey and Cancún), with 2.5 million national arrivals (-32.8%), of which 311 thousand were in October, registering in said month a reduction of only -14.5% compared to the same month of the previous year.

At the route level, 281.4 thousand passengers were transported on the Cancún – Mexico City route (arrivals and departures) in the month of October, that is, 10.4% of the total. This route, which is historically the most important in the country, shows a reduction of -32.2% in the month and -47.1% in the January – October period, with 2.2 million passengers. However, other important ones had a better performance in the last month, such as Guadalajara-Tijuana (-2.1%), Monterrey-Cancún (-8.6%), or Guadalajara-Cancún (-4.9%).