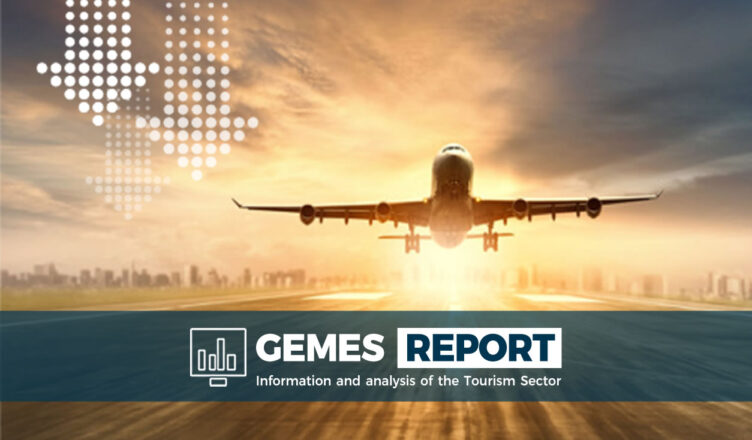 International visitor arrivals to Mexico declined -4% compared to March 2020 and, considering that by then the pandemic had already had an impact on Mexico’s tourism, it is pertinent to also compare with March 2019, for which the gap is -54.6% down.

A favourable result is that in March this year there was a rebound of 66.9%, compared to February, the previous month, which was mainly driven by US tourism and, to a lesser extent, by the incipient reactivation of South American and European markets. It should also be borne in mind that this is calculated on a very low base of comparison.

Based on figures from the Migration Policy Unit, 884.4 thousand visitors entered the country in March by air, and the cumulative total for the first quarter of the year is 2 million air visitors, representing a drop of -53.7% over the same quarter of 2020 and -61.2% compared to 2019.

The upturn last month was general in visitor arrivals from all regions, although it is clear that some regions are more important than others. North America is definitely the most important region for Mexico’s tourism, as it concentrates the two markets with the highest volume of tourists and, despite the fact that Canada is practically at a standstill, the number of visitors from North American countries reached 735.1 thousand, overwhelmingly from the United States, surpassing the level of March last year by 4%; even so, it is -50.8% below the level of the same month in 2019.

Visitor arrivals from South America showed the second best performance in the month, as some countries have increased travel. With 75.3 thousand visitors, they almost reached the same level of March 2020 (-1%) and present a decrease of -54.4% compared to the same month of 2019. On the other hand, Europe has performed more slowly, as air connectivity has not recovered and it was among the first regions to receive the strong impact of the pandemic; 45.8 thousand visitor arrivals from this continent were recorded in March, which even though it represents the highest level in a year, it means drops of -48.8% and -74% compared to March 2020 and 2019, respectively.

A highlight of the March results is that 8 out of 10 international visitors arriving by air to Mexico were US residents, a very high proportion compared to the same month in previous years (the highest was 64% in 2016). During the pandemic, when global tourism flows came to a standstill, tourists from the United States continued to visit Mexico, providing some oxygen to the country’s diminished tourism activity. The share of the US market had declined in recent months, but the data for February and March suggest that our international tourism will continue to be concentrated in the US, as long as the rest of the markets do not become more dynamic.

And it is difficult for the situation to change in the near future, considering that in March alone, US visitors totalled 732.2 thousand; an increase of 76.3% in arrivals compared to the previous month. Undoubtedly the spring break holiday season was an important motivator of this result which, although favourable, as it also presents a positive rate with respect to March 2020 of 31.6%, still remains at -36% below the March 2019 level.

In a completely different context, Canada, which for a long time was the second most important international market for Mexico, is today practically disappeared. The suspension of air connectivity between this country and Mexico ruined the most important travel season and in March only 2.9 thousand Canadian residents arrived; a very unfortunate scenario mainly for destinations such as Puerto Vallarta, Los Cabos or Mazatlan, as it makes up a good part of their international demand.

Another worrying situation is that of European countries, which until March still showed low levels of arrivals to Mexico, reaching levels below 10,000 visitors. With 8.7 thousand visitors, Spain was the best performing market on the continent last month, registering decreases of -5.1% compared to March 2020 and -54.8% compared to the same month in 2019. Germany ranked second with 6.1 thousand visitors and France third with 5.1 thousand residents; in both cases the decrease is around -80% compared to 2019 figures (-79.5% Germany and -81.8% France). The UK is the most severe case, with 3.5 thousand visitors, barely a tenth of March 2019 (-90.7%).

Weak air connectivity and low confidence to travel to a country with high numbers of infections and low vaccination rates have not allowed the reactivation of these relevant markets.

The graph below shows further progress towards the recovery of visitor arrivals from South American markets. Colombia, for example, is currently the country’s second largest international market. In March it reached 19.1 thousand visitors by air, exceeding the level of the same month last year by 9.3% and closing the gap with respect to March 2019 by -44.6%. The proximity between the countries and the resumption of air connectivity have played in favour of Mexican destinations. Brazil and Ecuador have also shown progress by adding 15.2 thousand and 8.9 thousand visitors in March respectively, higher arrivals than in 2020 (10.7% and 12.8% respectively). In all three countries, the highest volume of visitors was recorded in the thirteen months of the impact of the pandemic in Mexico. On the other hand, visitor arrivals from Venezuela are unprecedented, at even higher levels than before the pandemic. In March, 7.3 thousand entries by air were recorded, with increases of 277.2% compared to March 2020 and 72.1% above the same month in 2019.

Countries that have not performed as well are Argentina, Peru and Chile; the first two are even well below the level of arrivals in March 2020, when the pandemic had already hit. To this must be added the suspension of air connectivity with Argentina since the end of March and with Chile since the beginning of April, which will undoubtedly impact arrivals from these markets to Mexico.

Among the relevant markets for Mexico, the Asian markets have shown the least dynamism. There seems to be no recovery in the three key Asian markets for Mexican tourism. Japan, South Korea and, evidently, China, maintain deep declines in visitor arrivals to Mexico, -92.8%, -91.3% and -94.3% respectively compared to March 2019. The great distance, reduced connectivity, as well as Mexico’s unflattering image in terms of pandemic control, will keep these markets inactive.

Recent results confirm the strong dependence of Mexican tourism on the US market. After a difficult first two months, the spring break holiday season finally gave Mexican destinations some breathing space. The problem is that travel from other countries is not picking up at the same pace, while other tourist destinations are gaining importance, making competition fiercer. Advances in the vaccination process will be a good trigger for travel, but Mexico will have to keep up with its competitors and time is getting short, as summer is «just around the corner».