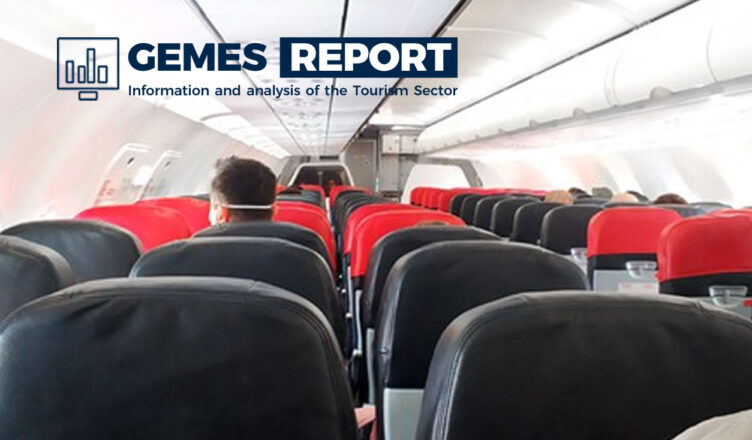 During September, the recovery in the arrival of international visitors to Mexico by air continued, although with less dynamism, since with 362.7 thousand visitors, a monthly increase of 11.3% was achieved, a rate slightly lower than the 13.2% registered in August. However, it should be noted that historically September was the month with the lowest flow of visitors to the country and in this unusual year, the trend changed. Compared to September 2019, the drop is -62.8%, the lowest of the previous five months.

In the January – September period, international air visitors totalled 5.5 million, with a decrease of -59.7% compared to the 13.8 million that arrived in the same period of 2019, which is equivalent to a loss of 8.2 million visitors. As can be seen in the graph below, the arrival of visitors by air had already been decelerating since 2018 when it grew only 4.7% and for 2019 the increase was 1.4%, in the same period considered.

The North American region has accumulated 4.3 million visitors by air so far this year, with a drop of -55.4%. Only in September the decrease compared to the same month of the previous year was -42.3%, being the least pronounced since the impact of the pandemic began to be felt in March. This is not the case of other important regions for tourism in Mexico, such as Europe or South America, which until the last month continue to show decreases of more than -90% in air arrivals.

As mentioned in previous issues of the GEMES Report, the gradual recovery in visitors arrivals is due to the fact that the United States market, the most important for Mexico, did not slow down their trips to the country to the same extent as the rest of the world. Likewise, the result reflects the progress in the recovery of the air connectivity of Mexico’s tourist destinations with major cities in the United States. Therefore, in the most recent months there has been a greater participation of this market over the total volume of visitors, which since July represents more than 90% of the total visitors who enter by air, when under normal circumstances the participation of the United States is about 55% to 60 percent.

If the figures by country are reviewed, it can be seen that the arrival of visitors residing in the United States has evolved better during the crisis period than the rest of the international markets. 329.8 thousand Americans arrived in September, with a decrease of -36.9% compared to the same month of the previous year. In comparison, Canada, the second most important market for Mexico, registered a fall at an annual rate of -92%, with 4.5 thousand visitors in the same month.

The performance of visitor arrivals from European countries registers a slower recovery, showing very low levels of visitors to Mexico. With 12 thousand visitors in total from all over the continent in September, the growth compared to the previous month was 15.9% and -91.6% compared to September 2019. France is the market with the highest number of visitors so far in the year, with 84.7 thousand visitors and a fall of -56.4% compared to the January-September period of the previous year. On the other hand, the United Kingdom, the country from which the decrease in arrivals in the region has suffered the most, experienced a monthly increase of 22.9% in September, although at the annual rate the sharp fall of -97.8% continues.

Of the main South American countries, Brazil and Ecuador stand out, which reported the smallest annual falls in September: -86% and -76.8% respectively. In both cases, the accumulated fall in the January-September period is -67.3%. There are increases in the arrival of visitors from other major countries, but in general they continue to register reductions of over -90%, compared to September 2019.

The arrival of Asian visitors amounts to 107.7 thousand during this year, that is, -70.4% less than in the period January-September 2019. In the last month, arrivals increased only 5.5% compared to the previous month and fell -91% compared to September 2019. The main markets for Mexico continue to register minimum levels of arrivals, where South Korea and China decreased from August to September, while Japan increased 5%.

The September results show a slowdown in the recovery of international visitor air arrivals. More visitors arrived than in August, but at a slower rate of growth. Once again, the lifeline is the US market, which accounts for 9 out of 10 monthly visitors; A situation that will not change in the near future, as the pandemic is still in force and with outbreaks in different countries, which impose restrictions on the movement of people and decrease the confidence of travellers.

Additionally, the resumption of air routes has been progressing more slowly with Europe, Asia and Latin America, this being a factor of crucial importance for the arrival of tourists from regions far from Mexico.