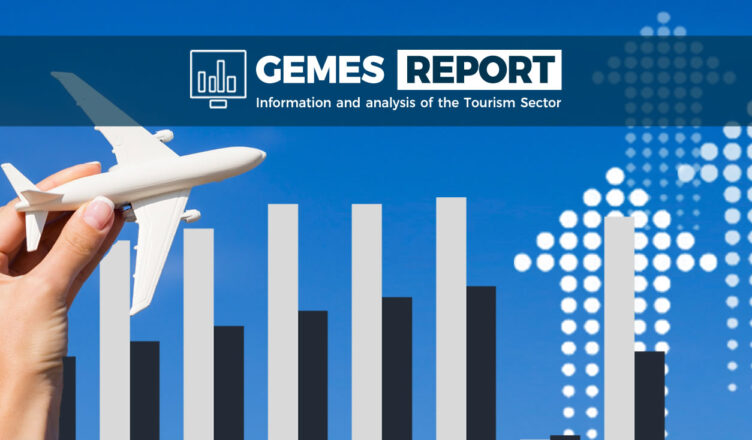 As can be seen in the following graph, tourist arrivals to beach destinations in May were at levels very close to those prevailing before the pandemic. However, city destinations are still far from recovering the number of visitors that were arriving prior to COVID-19.

Figures released by the Migration Policy Unit report the arrival of 813.7 thousand visitors to beach destination airports in May (slightly lower than the three years prior to the pandemic for the same month), while arrivals to city airports totaled 324.2 thousand (barely comparable to May 2014).

Comparing with 2019 figures, beach destinations show a clear advantage in the recovery of international visitor arrivals to their airports, as in May there is a decrease of -8%, the smallest drop since the pandemic impacted the country, which is also 27.1 percentage points above the drop reported a month earlier. In contrast, airports in cities are -42.2% below the May 2019 level of arrivals, down 13 percentage points from April’s drop. The gap between the recovery of beach destinations and cities widened since February and in the fifth month of the year is already 34.2 percentage points, with the former about to reach the pre-pandemic level of arrivals, while cities are still only halfway there.

Despite the fact that 21% fewer visitor arrivals in May than in the same month of 2019 to the entire country, there are destinations that in this month exceeded the volume of arrivals prior to the pandemic; among the 15 most important destinations by number of visitors, there are five beach destinations in this situation (Los Cabos and Cabo San Lucas, Cozumel, Ixtapa-Zihuatanejo and Loreto) and only two city destinations, Aguascalientes with 0.3% increase and Morelia, which increased by 15.6% and whose results can be attributed to visits to family and friends, boosted by the advance of vaccination in the United States.

Cancun airport registered a -14.6% decrease compared to May 2019 and concentrated 46.7% of total international visitor arrivals to the country in the fifth month of the year (a share 3.5 percentage points higher than in the same month of 2019). Proof of the strong momentum of the U.S. market is that, of the 534.2 thousand visitors, 458.6 thousand were U.S. residents, the highest number of visitors from this country to the destination on record for a month of May. With an increase over the same month of 2019 of 30.7%, the performance of this market contrasts with the sharp declines of other major tourist issuers to the destination, such as Canada (-98.1%) and the United Kingdom (-95.5%), which keep the movement of non-essential travelers restricted.

Visitor arrivals to Mexico City airport accounted for 15.8% of the total volume to the country in May (-10.7 percentage points less than in the same month of 2019). With 180.6 thousand visitors in the month, it regained position as the second most important gateway airport in the country. The lower preference of the U.S. market for city destinations is evident, with 95 thousand visitors from the U.S. to Mexico City, representing a drop of -38.2% compared to May 2019, very much in contrast to the increases in arrivals to beach destinations. On the other hand, an advance is observed in the recovery of the Brazilian and Ecuadorian markets, mainly, which report decreases of -15.3% and -19.3%, respectively.

The Los Cabos airport mirrors the situation of the rest of the Mexican destinations, for which the U.S. market accounted for more than 90% of the volume of international visitors in May. The destination received 158 thousand visitors, of which only 311 were residents of countries other than the United States. Even so, the number of visitors is 9.5% higher than that recorded in May 2019.

Other beach destinations were very close to recovering the number of visitors they had in 2019. Puerto Vallarta shows a decrease of -4.5% and Mazatlán of -10.8%, which reaffirms that, as the offer of destinations is restricted due to the pandemic, U.S. outbound tourism is opting to travel to destinations that air connectivity and proximity provide; a situation that puts Mexico in an advantageous position, at least while competitors are «out of service».