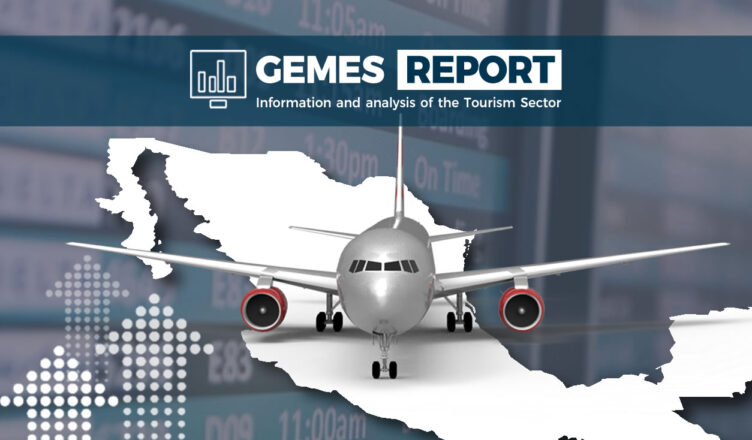 International tourism to Mexico has accumulated three months of sustained recovery in which both international tourist arrivals and visitor receipts have reached their highest levels in more than a year, according to data published by INEGI.

Through the results of the International Traveler Surveys, INEGI reports in May the arrival of 2.7 million international tourists entering the country, a figure that is 14.3% higher than the previous month and -23.2% lower compared to the same month of 2019. It is noteworthy that since March the magnitude of the drop with respect to the same month of 2019 has been reducing month by month. In May 2020 the sector was at a critical point due to the effects of the pandemic, so it is not considered particularly relevant to compare with that period.

A noteworthy aspect of the recovery in the volume of tourists is that 45.9% of the tourists who entered in May did so by plane, or 1.2 million people; a proportion 2.7 percentage points higher than border tourism (43.2%), which totaled 1.1 million. This is the first time in the entire pandemic period that tourism by plane represents a higher volume than border tourism, which is relevant because plane travelers spend more and benefit a greater number of destinations. Non-border tourism by land, on the other hand, totaled 288.6 thousand in May (10.9% of the total).

The evolution of air tourism has had its ups and downs on the road to recovery; however, there is an accelerated growth in recent months, reaching in May an increase of 28.8% over the previous month and a decrease of -20.5% compared to arrivals in May 2019 (the least pronounced drop in fifteen months). This performance, driven by U.S. tourism traveling mainly to Mexican beach destinations, which have remained open relative to other international tourist destinations, earned it a greater advance than that shown by border tourism, which reported a decrease of -29.4% in May, showing a less accelerated advance.

The recovery is also seen in spending per international tourist, which averaged US$560.1 in the fifth month of the year, the highest since March of last year and registering an increase of 10.3% over May 2019. Likewise, average spending per tourist arriving by air reached 1,062.4 dollars, 5.3% more than in May 2019 and accumulating 3 months at a positive rate (although a slight decrease of -1.1%, when compared to the average spending recorded in April).

The good results, both in terms of arrivals and average spending, have also resulted in higher visitor receipts.  Revenues from international visitors totaled 1,591.7 million dollars in May, the highest figure in the entire period of the pandemic in Mexico, which began in March of last year. Even so, the revenue in May represents a drop of -17.9% compared to the same month of 2019, equivalent to 346.4 million dollars less.

Higher tourist arrivals by plane in the last three months have significantly boosted the recovery of revenues in the sector.

The accumulated losses so far this year, however, are still substantial. The 10.8 million tourists that have arrived in the country in the January-May period by all routes, are 7.4 million less than in the same period of 2019 (a drop of -40.6%). Likewise, international visitor receipts totaled 5,836.8 million dollars; a figure 5,244.1 million dollars less than that achieved during the first five months of 2019; that is -47.3% less. Finally, the tourism balance reports a surplus of 4,177.5 million dollars, which is -41.7% lower than the accumulated balance up to May 2019.