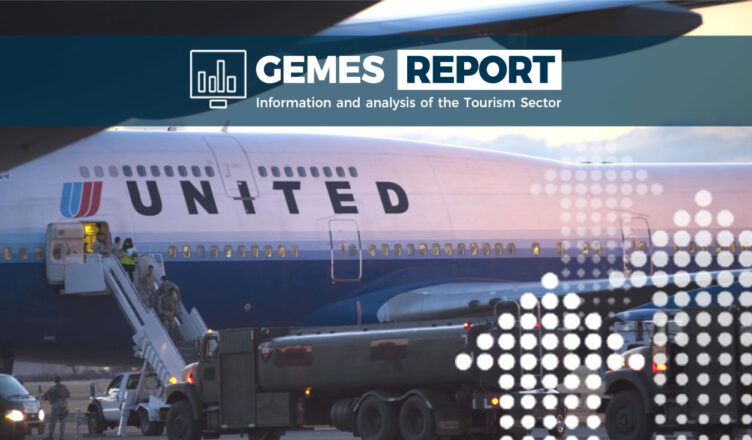 In a context of low levels of international travel worldwide, Mexico is experiencing a significant recovery in the arrival of international visitors by plane, driven by the U.S. market, according to the latest figures published by the Migration Policy Unit, which reports 1.1 million entries of residents abroad in the month of May, representing an increase of 27.8% over the previous month.

Compared to May 2020, when only 28.6 thousand visitors arrived in the country, an increase of 3,905% is reported, but what is most relevant is that compared to pre-pandemic levels, i.e. the same month of 2019, a drop of -21% was recorded, the lowest drop since the COVID-19 crisis impacted the country.

It should be noted that there is no generalized recovery of international markets, as reviewing the arrivals figures by region, a -3% reduction of resident visitors in North American countries is observed, compared to 2019, which contrasts with the rest of the regions. South America presents in May a decrease of about half of May 2019 arrivals (-52.4%). With 49.4 thousand visitors in total during the last month, Europe reports a drop of -67.5% (showing an advance in the last three months), while arrivals from the rest of the regions continue to fall more than -70%.

In a trend that has been present since the beginning of the crisis, the U.S. market share increased to represent 9 out of every 10 visitors entering the country by plane during the summer of 2020. After reducing its share in the last months of last year and the beginning of this year, it increased in recent months due to the boost in the arrival of visitors from this market since March. As a consequence, the United States once again represents almost the totality of the international tourism received by Mexico: 84.7% of the visitors that entered the country in May were residents of that country.

This is the result of the weak recovery of the rest of the markets, but also of the growth in U.S. international tourism, which is limited by travel restrictions imposed by other regions such as Europe. With no restrictions on travel to Mexico, the recovery is remarkable, so much so that 970 thousand arrivals of U.S. resident visitors by plane were reached in May, representing an increase of 30.2% over the previous month and 8.8% compared to the same month of 2019. This is the first time a positive rate has been recorded in the fifteen months of pandemic impact.

In contrast, visitor arrivals from Canada, the second most important market for Mexico, remain at minimum levels since air connectivity was suspended at the end of January. In May, 4.3 thousand visitors from that country were reported, with a contraction of -96.2% compared to the same month of 2019.

South American markets are more dynamic than European markets and together represent the second most important region for visitors to Mexico. However, there is a notable difference in terms of performance in recent months. Brazil has positioned itself as the second most important market for Mexico in terms of arrivals so far this year; and in May alone it added 24.5 thousand visitors, 13.2% more than in April and only below May 2019 by -21.9%. Likewise, arrivals from Ecuador continue to increase and in May reached 14.3 thousand, 15.4% more than in April and -16.8% less than in May 2019.

On the other hand, Colombia, which had begun to take off in the last quarter of last year, lost strength in April and barely rebounded in May, with 21 thousand visitors and a drop of -50.4% compared to the same month two years ago. Other markets, such as Chile and Argentina, continue with decreases of more than -90% due to border closures.

Japan, China and South Korea, the three most relevant markets in the Asian continent, have been registering less than one thousand visitors to Mexico for fourteen months now. Japanese arrivals even dropped from April to May to 789 arrivals, and in this last month they reported a -90.9% drop. China, with 874 visitors in May, reports a reduction of -89.4% compared to the same month of 2019, while South Korea added 702 visitors and a contraction of -90.3%.

While travel restrictions and border closures remain in place in several countries, U.S. tourism to Mexico is strengthening and even grew in May. However, we must consider that this circumstance is gradually changing, in addition to the fact that the rest of the relevant markets continue to stagnate or recover slowly.