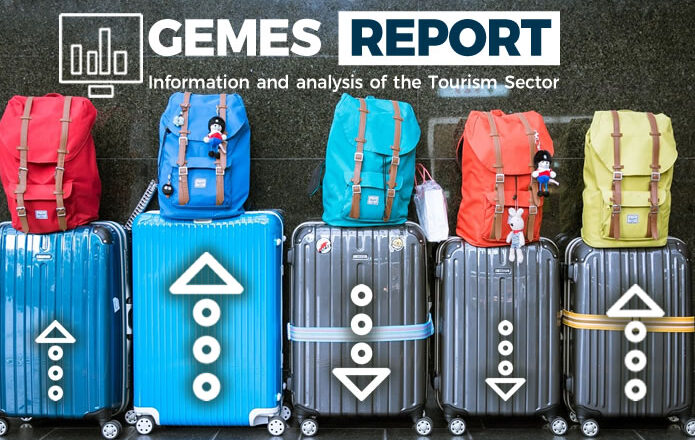 International visitor air arrivals are recovering slowly and gradually, even so, Mexican tourist destinations continue to suffer the ravages of the pandemic. While the arrivals of visitors residing in the United States begin to increase gradually, those coming from the rest of the markets have been dripping since April.

Comparing with 2019 figures, visitors air arrivals to beach destinations registered an annual decrease of -57.2% in September, equivalent to 299.8 thousand fewer visitors compared to September of the previous year. On the other hand, with a reduction of 312.6 thousand visitors by air, city destinations show a more pronounced drop of -69.4 percent.

The most important destinations in the country are slowly recovering, practically based on the arrivals of American visitors; although the gap to reach the levels of the previous year remains wide. For example, Cancún and Mexico City, respectively the most important beach and city destinations in the country in the international market, added 145.4 thousand visitors the first and 61.5 thousand the second in September, with decreases of -63.1% and -80.2 % compared to the same month last year. The recovery is not uniform: on the one hand there are destinations such as Cozumel or Morelia, with decreases of less than -20% (-18.7% and -18.6% respectively); and on the other Mérida, Mexico City (previously mentioned), Huatulco, Monterrey or Querétaro, whose arrivals are below -70% of the level reached in September 2019. In an intermediate place are Los Cabos with a fall of -35.2% compared to September of last year and Guadalajara with -34.6%

With 140.9 thousand US residents arriving in Cancun by air in September, the gap compared to the same month last year was reduced to -20.4%. However, it should be noted that from August to September dynamism was lost in this market, whose arrivals only increased by 1.8%, unlike other destinations in the country. Likewise, the arrival of visitors from the rest of the international markets maintains minimum levels, which are counted by tens and only in some cases by hundreds.

Mexico City reports a more heterogeneous recovery, favored by the gradual reactivation of air connectivity with some countries. 37.4 thousand visitors arrived from the United States, representing a decrease of -65.2% compared to September 2019, but with an increase of 22.8% compared to August. From Spain, Ecuador and Canada came 16.7%, 43.5% and 19% more visitors respectively, from one month to another. Although Brazil, which has been the second market with the most arrivals to CDMX for two months, decreased -8.1% from August to September, the same trend as France (-3.9%).

With 50.3 thousand visitors at the Los Cabos airport in September, of which 99.5% were Americans, this destination was the third most important in the country and the second most visited by that market (behind Cancun). Other historically relevant markets for Los Cabos, such as Canada or Australia, continue without being reactivated, so it remains in total with a decrease of -35.2% compared to the level of arrivals in September of the previous year.

With only one international market with a significant presence, although it is the most important (the United States), it is difficult for activity in the country’s tourist destinations to recover quickly. No dynamism is observed in other relevant markets in Europe and South America, so dependence on the United States continues, which is fragile considering that said country continues to increase alarmingly in COVID-19 cases; which is why it cannot be expected that air connectivity with other markets will be reactivated soon.